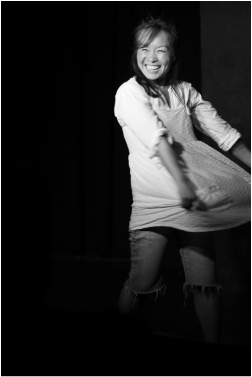 Born in South Korea, Marissa was adopted at the age of seven. She grew up in small town in Otisvile, New York and caught the acting bug in the fourth grade when she was cast as a chimney sweeper in MARY POPPINS. She hasn't stopped performing since. She attended Marymount Manhattan College where she earned her BFA in Acting. Shortly after she attended the British American Drama Academy  and then the University of Washington where she received her MFA in Acting at the prestigious Professional Actors Training Program in Seattle.  She has worked in New York City, including Off-Broadway and regionally at Guthrie Theatre, Goodman Theatre, Court, Steppenwolf, The Denver Center and will next appear at Silk Road Rising with her solo show YELLOW DRESS. On screen she has appeared on Chicago Med, Chicago Justice, Chicago Fire on NBC and the independent feature film IMPERFECTIONS.

In 2006, She moved to South Korea to work both as an actress and English teacher. It was there she reunited with her biological Korean family after twenty years of living in America.

In Spring of 2011 she wrote her one woman show YELLOW DRESS which received critical acclaim at both the Hollywood and New York International Fringe Festival. She is developing the project further and will be doing a limited engagement in Chicago. You can find more information on YELLOW DRESS at
yellowdress-soloshow.com.

She has lived in New York City, South Korea, London England, Seattle Washington and currently resides in Chicago with her husband Nathan, and her empathetic 3 years-old son Laike (sounds like lake).